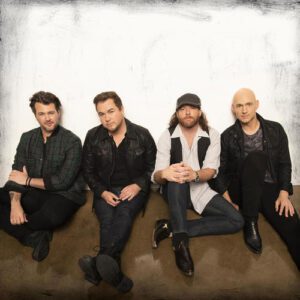 (Valparaiso, IN) Today we are happy to announce our expansion into the Valparaiso market as we are bringing Eli Young Band to Central Park Plaza on June 17th, 2021! This will be an exclusive show at LIMITED CAPACITY with all COVID Safety protocols in place!

MULTI-PLATINUM hitmakers Eli Young Band are charging full speed ahead with their brand new single, “Break It In,” after achieving their fourth #1, “Love Ain’t,” off their latest project, ​THIS IS ELI YOUNG BAND: GREATEST HITS​ (The Valory Music Co.). Staying true to their Country roots over a storied career, their top-charting hits include PLATINUM “Drunk Last Night,” 2X PLATINUM “Even If It Breaks Your Heart” and 3X PLATINUM “Crazy Girl.” With smash singles claiming ​Billboard​’s #1 ​Country Song of the Year​ and ACM Awards ​Song of the Year​, EYB has earned multiple nominations from GRAMMY, CMA, CMT, ACA and Teen Choice Awards.

Tickets are on on-sale Friday March 5th for $30! Tickets can be purchased at: (HometownJams.com).