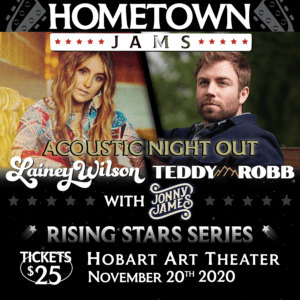 (Hobart, IN) Today we are happy to announce our first show back after a 8 month COVID hiatus! Teddy Robb and Lainey Wilson are coming to the Hobart Art Theater on November 20th, 2020 for an Acoustic Night Out! This will be an exclusive theater show with LIMITED TICKETS AVAILABLE as capacity will be capped at 50%!

This will also be our first show under our new HOMETOWN JAMS branding! As we look forward to 2021 and beyond, our #1 goal will always be to continue putting on the best shows across Northwest Indiana. This new branding allows us to expand outside of just our Hometown Country Jam Music Festival! If you’ve loved our past shows, just wait and see what we have planned for 2021… While this year brought the world to its knees, we will come out of this stronger and better than ever before. Thank you to everyone for believing in us. Get ready because next year is going to be something special!

Teddy’s debut single, “Really Shouldn’t Drink Around You,” has over 50 million worldwide streams to date and shipped to country radio last year. Teddy performed the song to a national audience on NBC’s TODAY Show and his music has been written about in the pages of Rolling Stone, Billboard and more. In April 2020 Teddy released his self-titled, debut EP. The five song project includes “Really Shouldn’t Drink Around You,” as well as previously released tracks “Lead Me On” and “Tell Me How,” which have collectively been streamed over 80 million times. New tracks on the EP include “Me On You” and “Good Love & Good Whisky.”

Pinned as an “Artist to Watch” in 2020 by Pandora, The Boot, and Sounds Like Nashville and included in CMT’s “Next Women of Country” program, Lainey Wilson kicked off the year by making her Grand Ole Opry debut—a dream come true for the Baskin, Louisiana native. Hailing from the small farming community, the Country newcomer has as much grit in her as she does soul. She moved to Nashville in a bumper-pull camper trailer to pursue a career in music and has been carving her own unique place in the country music landscape ever since, already garnering early praise for her “unabashedly down-home and unflappably worldly” (NPR) style and exhibiting “just enough scars and pragmatism to write great, universal country songs” (Taste of Country). From landing a TV placement in Paramount Network’s hit series Yellowstone to having co-writer credits on songs recorded by fellow country artists including Luke Combs, the songstress’ talents continue to influence more than just her own artistry. Taking her talents out into the world, Lainey continuously logs an impressive number of miles on the road, performing for sold-out crowds throughout the US, UK, and Germany with notable names like Rodney Atkins, Tyler Farr, Ashley McBryde, Randy Houser, Josh Turner, Morgan Wallen, and more.